PC-24 Jet Protoype Made a Splash at EBACE 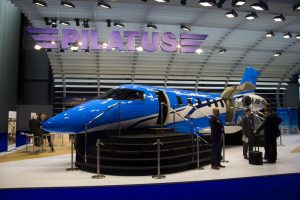 Pilatus Aircraft gave the first prototype of the PC-24 Super Versatile Jet a day’s break from its test flight duties to be featured on the static display outside Palexpo as part of the European Business Aviation Convention and Expo this week at the Geneva Airport.

The airplane and a second prototype have accumulated more than 500 hours of testing during more than 300 flight tests. The twinjet, which is designed for operations on unimproved airfields, is on target for market introduction in the fourth quarter of 2017.

With more than 80 orders, the Stans, Switzerland-based company has closed the order book for the time being. However, potential customers at EBACE were able to check out the new cabin configuration, which made its debut at Pilatus’ indoor exhibit at EBACE.

Six color offerings will be available, each named after a famous ski resort. Each scheme focuses on colors found in nature, and Pilatus teamed up with BMW’s Designworks for the development of the interior.

In addition to color selections, customers can choose between several customized cabin configurations with seating, generally accommodating six passengers in the main cabin.

A vacuum-style lavatory is cleverly hidden in a cabinet-like section at the entrance area and folds out if need be. There are doors to provide privacy from the cockpit area and the main cabin area.

This article originally posted on AviationVoice.com.