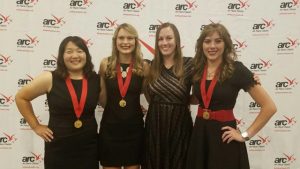 On June 28, an Indiana State University team finished second overall in a national all-women’s airplane race, a four-day competition geared toward promoting the legacy of pioneering females in aviation.

Lydia Kost, Kayleigh Bordner and MiJin “Jean” Kim returned to Terre Haute Monday after accepting their medals in the Air Race Classic 2016. It was ISU’s first top-10 overall finish since 2010.

Only about 6 percent of licensed pilots in the U.S. are women, and there are just six women enrolled in ISU’s undergraduate professional aviation flight technology program, according to the team. When Kost began flying, she was among four women in her class, and the only one to receive a private pilot’s license.

The race was an opportunity for the up-and-coming pilots — all certified instructors at ISU’s Flight Academy — to network with other women in their field.

“It’s just a good relationship because there are just so few of us, compared to … just the overall number of pilots out there,” said Kim, 28, a 2010 program graduate now pursuing an MBA in technology management from ISU.

The women taxied their Diamond DA-40 single-engine plane onto the runway at Terre Haute International Airport late afternoon, spending about an hour on the scorching tarmac for photographs before heading inside the Flight Academy’s offices.

Terre Haute will be the final stop for the race in 2020.

Teams took off from Prescott, Ariz. and had four days to touch down in Daytona Beach, Fla. The route covered 2,720 miles across 12 states, including stops or fly-bys at 13 designated airports along the way.

This year’s stops were planned at or near college or university aviation programs. Embry Riddle Aeronautical University hosted the start and finish of the race.

Each race plane receives a unique handicap and the team that beats its handicap by the largest margin wins. Embry Riddle’s team placed first overall with a score of 7.417, compared to ISU’s score of 5.731.

ISU also finished second overall in the collegiate division out of 19 teams. All women flight instructors from the Flight Academy competed in the race on various teams.

This article was originally posted on AviationPros.com.