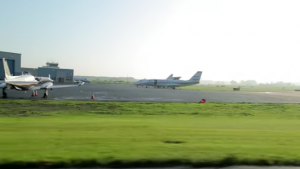 Morristown Airport (MMU) officials hope a new documentary will highlight the airport’s vital role in the business aviation community, and the positive impact the airport has on the local economy and to area employers, said Morristown Airport’s Marketing and Community Relations Coordinator Corey Hanlon.

The film explains to the public – who may be unfamiliar with business aviation – how Morristown Airport provides access to and from areas not served by commercial airlines. MMU allows for quick access for personnel and proprietary or fragile equipment into and out of the greater New York metropolitan area, and is a conduit for the economic vitality of local businesses, whose employees can easily travel to company production facilities, clients’ locations and more. The airport, located about 25 miles from downtown Manhattan, has an economic impact of more than $400 million to the New York/New Jersey metro area.

“The video is about local and national outreach,” said Hanlon. “We want to highlight the positive impact of the airport, including the 1,500 jobs it brings to the community. “We also hope this outreach helps to increase our transient traffic,” he added. “Many people don’t realize the airport can handle business aircraft of all sizes and it is one of the most convenient general aviation airports to New York City and the greater metropolitan area.”

Morristown Airport officials said a strong general aviation airport can help attract and retain businesses of all sizes, which means jobs, additional tax base and increased overall spending in the area. In addition, the airport hosts medical flights, flight training and recreational flying. MMU also will serve as a host airport for the Sept. 7, 2017, NBAA Regional Forum. A multimillion capital improvement program which will include the reconstruction of the main runway, improved drainage and a new approach lighting system, will begin next year. Hanlon said airport officials are planning to minimize the overall operational impact to based tenants and transient users by completing the project in short stints over the course of eight to 10 years. MMU officials worked with the Morris County Chamber of Commerce, NBAA and MMU-based tenants on production of the film.