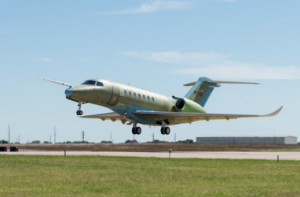 Cessna Aircraft Company, a subsidiary of Textron Aviation Inc., a Textron Inc. (NYSE:TXT) company, today announced the successful first flight of its Citation Longitude super-midsize jet. The flight comes less than a year after the company unveiled new details for the revolutionary aircraft – the company’s latest example of continued investment in its family of larger business jets.

“Today’s successful first flight of the Citation Longitude was performed exactly as we anticipated,” said Scott Ernest, president and CEO, Textron Aviation. “Our product development process is second to none and allowed us to move smoothly from unveiling the Longitude last November, to the first flight of the prototype in just 11 months. This milestone not only showcases our continued commitment to investing in new products to meet market demand, but also our focus on investing in our development and production processes to bring the aircraft to market quickly without compromise.” The Longitude took off from the company’s east campus Beech Field Airport, piloted by experimental test pilots Ed Wenninger and Stuart Rogerson. During the two hour and two minute flight, the team tested the aircraft’s flaps, landing gear, pressurization systems, stability and control.

“I was extremely pleased with the performance of the Longitude during the first flight,” said Rogerson, senior flight test pilot. “The level of maturity in flight characteristics is already very high. I was particularly impressed with how intuitive the flight systems are, validating the extensive integration work done by our development teams. We accomplished everything we wanted to do during this maiden flight, setting the pace for the flight test program.” The prototype aircraft will continue to expand the performance envelope, focusing on testing flight controls and aerodynamics, while the first production model, set to fly in the coming weeks, will be primarily used for systems testing.

“With industry-leading design and production expertise, our world-class team is able to execute quickly and precisely, enabling the company to bring new concepts to market faster so both pilots and passengers enjoy an unrivaled level of capability and comfort,” said Michael Thacker, senior vice president, Engineering, Textron Aviation.