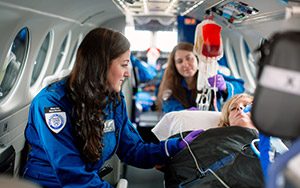 A blue and grey Beechcraft-Textron King Air 350C has been plying the skies in the Midwest and other parts of the country since late September, but what’s inside the airplane may be surprising.

On any given day, the twin-engine turboprop aircraft may be delivering a heart for immediate transplant, transporting a surgeon to a hospital to provide expert assistance with a life-saving operation or bringing a patient in need of specialized care to the Mayo Clinic facility in Rochester, MN.

The new King Air, along with a dedicated fleet of four American Eurocopter EC145 helicopters and a team of 35 pilots, 10 aircraft mechanics and a number of medical support staff, make up the Mayo Clinic Medical Transport (MCMT). The aircraft are owned and operated by the world-renowned Mayo Clinic, which has a large primary campus in Rochester and counterpart campuses in Arizona and Florida, as well as other medical facilities in the Midwest.

“We’ve had an emergency air medical transport program since 1984, but since we started our own Part 135 certificate in 2013, we’ve gained a lot of operational control and flexibility that we didn’t have before,” said Joel Kozlowski, director of air operations at MCMT. For example, Kozlowski noted a recent trip from Rochester to bring a Mayo physician to a hospital in Grand Forks, ND. “While we were there, we got a patient request from Fargo (ND), so we were able to pick up the patient and come home, all in the same trip.”

Kozlowski and chief pilot Bob Ringold are excited about the opportunities the King Air brings to the MCMT program.
“The King Air obviously lets us travel longer distances and to many more locations than the helicopters,” said Ringold. With a range of nearly 1,700 miles, and the ability to land at airports with a minimum 5,000-foot runway (and MCMT is working on an approval to land with a 4,000-foot minimum), the turboprop greatly expands the capabilities of the MCMT program. By handling its own maintenance, fueling and the like, MCMT is also realizing greater efficiencies and cost savings.

With nearly 80 percent of Mayo Clinic’s patients coming from within 600 nm of Rochester, Kozlowski said that the King Air’s profile fits perfectly with MCMT’s needs, including the ability to fly in marginal weather conditions that the helicopters can’t safely tackle.

The aircraft is outfitted with a 52-inch cargo door, which makes it easier and safer to load a patient onboard, as well as the Max-Viz enhanced vision system in the aircraft nose, and heavy-weight landing gear. The interior is equipped with the latest medical equipment, essentially making the aircraft an airborne emergency department. The cabin has room for one patient and up to six medical personnel.

“With the onboard medical crew and equipment, we have the same level of capability as a Level 1 trauma center during that critical golden hour window,” said Ringold.