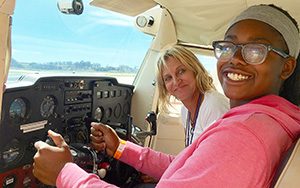 A Different Point of View was incorporated as a nonprofit in 2012 in hopes of encouraging young people to see a future in aviation.

A self-described “outlier,” who has worked for and enjoyed a rewarding life as a pilot, flight school chief pilot and airline captain, Lynn Houston decided six years ago that it was time to give back to young people searching for a better future by using aviation as a launching pad.

Based at California’s Santa Barbara Airport (SBA), she beta tested A Different Point of View in 2011, and incorporated the program as a nonprofit in 2012 in hopes of encouraging young people to see a future in aviation.

The program’s emphasis on careers in general aviation – including business aviation – as an industry that supports more than 1 million American jobs, reflects a central theme of the No Plane No Gain advocacy campaign, jointly sponsored by NBAA and GAMA.

“Aviation should not be for the privileged few, and just as attitude plus power equals performance in aviation, attitude plus a person’s sense of self will determine if they will climb or descend in life,” she said.

A Different Point of View is open to anyone between 14 and 19 who is interested in aviation. The program introduces them to a full spectrum of aviation opportunities through one and three-day aviation career programs. Based on family income, a sliding scale fee offsets the costs. Most students receive scholarships, but all pay the $50 application fee so everyone has some investment in their program.

Held at Above It All Aviation, an SBA flight school, the career programs are limited to 12-15 teens.

“When they put on the t-shirt and step onto the tarmac, we are all the same family,” said Houston. Each student receives professional flight lessons, workshops on maintenance and ATC communications, which teaches the importance of communications in life as well as aviation, followed by full-motion simulator training.