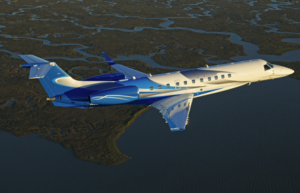 Although Embraer’s business jet deliveries decreased in the second quarter when compared to last year, the company reached a 29.5 percent jump in revenues in the quarter due to an increase in the demand of large business jets and commercial deliveries! Check out the article, below, to learn more!

Despite the improved revenue performance, Embraer’s business jet revenues are still down close to 18 percent for the first half to $566 million. This reflects the 44 percent plunge in first quarter sales.

While business jet shipments were soft overall in the first half, Embraer president and CEO Paulo Cesar Silva was encouraged that the company is seeing some reasons for optimism. “Of course, the market is still under big pressure,” he said. “However, we have seen some signs of improvements on the used market.There is some stability in prices, and no further deterioration, in general, in the value of the aircraft.”

Embraer has adopted a more disciplined approach to pricing, he said, adding this is beginning to improve margins, and he expects this improvement to continue throughout the year.

This article was originally posted on AINOnline.com