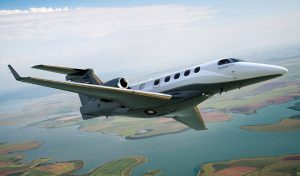 The Embraer Phenom 300 has been the best selling light jet in recent years, but the HA-420 HondaJet could give it a run for its money in 2017.

If midyear results are any indication, the HA-420 HondaJet could be the most delivered light jet in 2017. If it pulls off the feat, the HondaJet would assume the title from the Embraer Phenom 300, which has been the best seller in this category for four years running.

According to the latest statistics from GAMA, Honda Aircraft delivered 24 of its light jets in the first half, while Embraer shipped 20 Phenom 300s. However, on the manufacturing side, Embraer has the upper hand. Greensboro, North Carolina-based Honda Aircraft is currently manufacturing HondaJets at a rate of about four per month, and it won’t ramp up to its capacity of 80 aircraft a year until March 2019. Embraer Executive Jets’ facility in Melbourne, Florida, currently has the capacity to assemble up to 96 Phenoms annually, and more if a third shift is added.