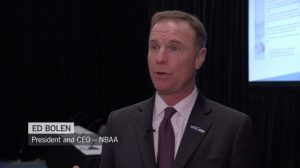 The recent NBAA one-day forum attracted more than 2,400 visitors, with the hot topic of the upcoming ATC vote on the minds of many.

With the vote on a measure to privatize the nation’s air traffic control system scheduled for next week in the House of Representatives, airline-funded ads attacking business aviation are flooding the Washington, D.C. airwaves, according to NBAA president and CEO Ed Bolen. Speaking this morning at the NBAA Regional Forum at New Jersey’s Morristown Municipal Airport, he described the measure—HR 2997, the 21st Century Aviation Innovation, Reform, and Reauthorization Act—as a power grab by the airlines.

“We are an industry at war, and our future is dependent on how we survive that,” he said, urging everyone in the industry to contact congressional representatives and urge them to defeat the measure. To facilitate that, a website, atcnotforsale.com was developed by a broad-based coalition of general aviation organizations including NBAA, AOPA, NATA and HAI. “In the 25 years I’ve been in the industry, this is probably the most significant threat we’ve had,” noted Bolen. “If this bill passes the House, every day it gets over another hurdle, it gets stronger not weaker, so our best chance to stop it is to stop it early.”