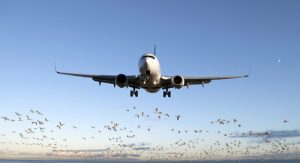 The Conversation recently published some insight about what happens when a bird strikes a plane. Below is an excerpt from this release.

In bowling, a strike is the best shot you can make. In aviation jargon, however, a strike happens when a bird suddenly crosses the trajectory of an aeroplane. Usually, with an adverse outcome for the bird.

It’s not a rare occurrence for a bird and a plane to collide. A recent Japan Airlines plane bound for New York had to make an emergency landing due to a bird strike, while another plane was forced to return to Cardiff Airport in Wales after a bird hit an engine.

In 2016 there were 1,835 confirmed bird strikes in the UK alone – about eight every 10,000 flights. These can have a huge impact on airlines: planes struck by birds have to be carefully inspected for what is known as barely visible impact damage, which may become dangerous if undetected.

Only about 5% of bird strikes result in damage to the aeroplane. However, as a precaution, all struck aeroplanes return to the nearest airport, passengers have to be disembarked and booked onto another flight with a fresh crew – all of which can have a huge impact on the airline’s operations. It is very difficult to figure out indirect costs, but Transport Canada estimates that in North America it tops US$500m.

This article posted on AEROTime.aero.