The recent conversation throughout the business aviation industry has focused on the shift of aircraft sales transitioning to a seller’s market within the last couple months. With overall inventory down, sellers are seeing an increase in prices for the sale of their aircraft due to the higher demand. If you have been considering selling your aircraft, now is the time and CFSJets will make it easy!

Our knowledge and experience will save you time and money when listing your aircraft. CLICK HERE for information or call us at (704) 359-0007 to learn more!

The preowned business jet market transitioned to a seller’s market in December, with inventory now at 9.9 percent, just below the 10 percent threshold of inventory for sale and down from 11 percent in December 2016, according to data released yesterday by JetNet. Inventory of preowned business jets has decreased steadily from a high point of 2,938 aircraft in July 2009, or 17.7 percent of the in-service fleet, to 2,143 jets in December.

“A period of transition is now in play, wherein the pendulum swings [from] in favor of the buyer to the seller,” the business aviation data firm said. “The pristine used jets that were on the market a few years ago have become more challenging to locate. The sage advice for buyers is to act now. The counsel of ‘just wait a few months—the price will come down’ may not present itself as we break into the seller’s market environment.” 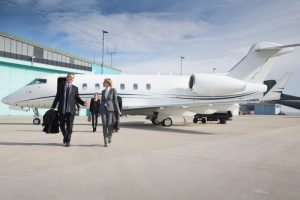 According to JetNet, there were 2,668 more business jet transactions last year, an increase of 177, or 7.1 percent, over 2016. Preowned transactions were boosted last year by large-cabin jet deals, which accounted for 37 percent, or 992, of the total transactions; this was up 17.3 percent from 2016. Sales of preowned light jets also surged 8.2 percent last year, to 952 transactions. Meanwhile, preowned midsize jet sales slumped 4.9 percent, falling from 630 in 2016 to 599 last year.

“The recovery in business aviation during the post-recession period has been underwhelming,” JetNet said. “Now that 2018 is here, we hope the U.S. preowned market, along with improvements in the world economy, will continue to push more new aircraft purchases.”

This article originally posted on ainonline.com.