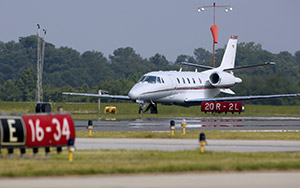 General aviation, including business aviation, is a vital contributor to the economy in every state, and in May, the governors of Alaska, Maine, Nebraska, New Jersey and New York officially recognized the industry for the important role it plays. Every state, in addition to hundreds of communities throughout the United States, have highlighted general aviation over the years for its contributions to the success of companies and citizens around the country. Continue reading, below, for each states proclamation!

“The economic contribution of the aviation industry in Alaska generates over 47,000 jobs, $3.5 billion to the state economy annually, and 8 percent of Alaska’s gross state product,” Gov. Bill Walker wrote in his proclamation.

Alaska has more private planes per capita than any other state, and Alaskans fly more than eight times as often as resident of other states,

According to Gov. Paul LePage, “Our communities depend of general aviation to support Maine’s response to emergencies, natural disasters and rescue missions; as well as on our community airports for continued flow of commerce, tourists and visitors to our great state.”

General aviation in Nebraska has a total economic output of $1.2 billion annually and supports 7,000 jobs according to a proclamation from Gov. Pete Ricketts. “General aviation and community airports play a vital role in the lives of our citizens, as well as in the operations of our businesses and farms,” he wrote.

“General aviation provides a substantial economic benefit to New Jersey from the operation of the public use airport system and from the tourism and commerce it supports,” Gov. Phillip Murphy wrote in his proclamation.

General aviation in New York contributes significantly to the economy of the state, creates hundreds of thousands of jobs for New Yorkers and generates billions of dollars in payroll tax revenue.

New York leads the nation in promoting research and innovation in the implementation and testing of new aviation technologies such as unmanned aircraft systems to prepare their workforce of the future of aviation, the governor wrote.

This article was originally posted on noplanenogain.com