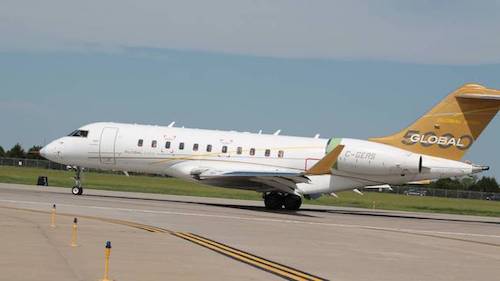 Last November Bombardier said it would move its Global 5000 completions from Canada to Wichita in the second half of 2018. The company expects to add 100 jobs in Wichita with the move.

“The 5500 will share the same completions line,” Bombardier spokesman Mark Masluch said in the e-mail. “We will be working on both aircraft.” The addition of the 5500 work in Wichita — which would include the installation of bulkheads, seats and cabinetry — practically guarantees many more years of work than completions would on the 5000, a nearly 13-year-old plane.

“I think it’s a very smart move,” business aviation forecaster Rolland Vincent said Tuesday. “The 5000 was very much on the decline. I think this should rejuvenate demand.”

The Global 5000 entered service in 2005, a variant of the Global Express, which Bombardier no longer produces. With maximum seating for 16 passengers and three crew, it is the smallest of the Global family that includes the 6000, 6500 and its newest and largest, the 7500 (which was renamed from the 7000 to reflect greater range and other new features).

Bombardier said the 5500 and 6500 add new Rolls-Royce Pearl engines — which were certified earlier this year and add 500 nautical miles to its range — a new trailing edge on the wing and a Rockwell-Collins Pro Line Fusion avionics package that Bombardier brands as its Vision flight deck. The 5500’s interior also will have the company’s Nuage seating. The new seats, which Bombardier said “is the first new seating architecture in business aviation in 30 years,” were introduced last month.

This article was originally posted on kansas.com