Honeywell HQ, an electronics manufacturer, will be moving its headquarters to uptown Charlotte. Honeywell has already begun the hiring and relocating process. Read the article below to find out more about this great opportunity for the Charlotte area. 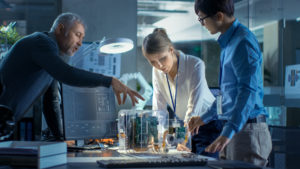 The electronics manufacturer, which is relocating its corporate headquarters to Charlotte from New Jersey, will occupy about 280,000 square feet at 700 S. Mint St. — the third office building to come to Lincoln Harris’ 10-acre uptown Charlotte site. Honeywell (NYSE: HON) has signed a long-term lease agreement for nine floors at the 23-story, 330,000-square-foot office tower, expected to break ground in September and be finished in the first half of 2021. The Charlotte Business Journal previously reported a third office building was pegged for the Mint Street site, but the square footage of the building has since increased.

Johno Harris, president of Lincoln Harris, said Honeywell coming to Charlotte is an “extreme plus” and puts an exclamation point on the current office momentum in uptown Charlotte.

Honeywell has already begun hiring and relocating positions to Charlotte. Starting next month, the company is expected to begin moving into two floors at 300 South Tryon, its headquarters space until the Legacy Union tower is finished, said Dan Kirschner, vice president of global real estate at Honeywell.