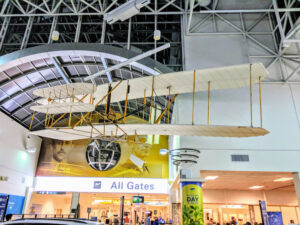 The Ohio Air & Space Hall of Fame has finally found a permanent home in the Port Columbus air terminal at John Glenn International Airport. This terminal was chosen by none other than world-famous aviator, Charles Lindbergh. Not only is this terminal and hall of fame in honor of the historic advances Ohio brought to aviation, but also to Charles Lindbergh. Continue reading to learn more!

OAS Executive Director Ron Kaplan noted the building in Columbus, OH was originally constructed to serve as the eastern terminus of Transcontinental Air Transport, one of America’s first commercial airlines, at the behest of famed aviator and airline executive Charles Lindbergh. The building served as the Port Columbus air terminal until 1958 and was later renovated as office space before falling into disrepair.

Despite its storied role in U.S. aviation and place on the National Register of Historic Places, the iconic Art Deco-style building has sat unused for nearly 15 years. OAS plans an estimated $2 million renovation of the approximately 12,000-square-foot terminal and surrounding land.

“For Ohio, the Birthplace of Aviation, to finally have its own aviation hall of fame is a milestone in itself,” Kaplan said. “For Ohio Air & Space to make its home at one of the most historic sites in American aviation history – one picked in 1928 by no less than Charles Lindbergh – is over the top.”

Renovation of the terminal will be bolstered by a $550,000 grant from the State of Ohio, to be matched with the same amount in private funds prior to being released. Securing the lease is a vital step toward those efforts, Kaplan noted, pointing to CMH’s ongoing role in the nation’s aviation story.

“Ohio Air & Space will be located just 500 feet from Hangar One, where Foster Lane started Lane Aviation in 1935,” he explained. “After Lane moved to their current location in 1964, Dick Lassiter, Curtis LeMay, and Paul Tibbets moved Executive Jet Aviation into the facility. EJA spawned NetJets, now headquartered on the north side of the airport.

“I could go on for days,” Kaplan concluded. “It’s just going to be a blast using such stories to get kids and visitors to Ohio Air & Space excited, especially with Ohio still making aviation history.”