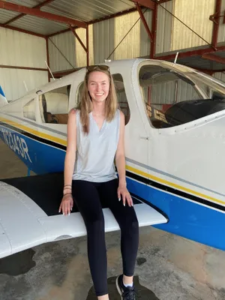 A 17-year-old Gastonia girl accomplished her first solo flight in October of this year. The teen, Shelby Duncan, started learning how to fly when she was just 14-years-old. Continue reading below to learn more about her journey of learning to fly and find out what she plans on doing next.

Though Shelby Duncan enjoys the convenience of a car, the teenager believes there’s nothing quite like taking to the sky in a single-engine airplane. At Gaston Christian School, her fellow students know Duncan as a senior track athlete and member of the mock trial club. Rather than taking piano lessons or playing club sports in her free time, she’s flies around Gastonia Municipal Airport with her flight instructor. In fact, she’s spent more time in the air than she has behind the wheel of a car. Duncan, 17, completed her first solo flight at Gastonia Municipal Airport in October.

Learning to fly
Duncan’s father, John Duncan, has an extensive background in aviation. His sister and Duncan’s aunt, Nancy Duncan, took John on his first flights before he was old enough to begin learning to fly. John worked as a flight instructor while attending N.C. State and flew for several corporations before becoming a commercial pilot for Piedmont Airlines in 1988. He’s now the director of standards for American Airlines and still flies regularly. John took his children for their first dose of the family hobby by putting them in a glider – an aircraft without an engine that is towed by an airplane into the air — in 2017 at the Bermuda High Gliderport in Jefferson, South Carolina. “I always felt like I wanted to expose them to different stuff, because the best advice I ever received was you raise them to be little independent adults,” John said. “She (Shelby) had this big smile and said, ‘can I take flying lessons?'” Up until this point, Duncan was never much of an adrenaline junkie, and life seemed pretty good on the ground. But she realized she had flying all wrong. “It was quiet and peaceful,” Duncan said. “Because there’s not an engine, you just heard the wind and you were able to relax and see the world from a different angle.” Duncan eventually earned her glider pilot license, completing her first solo flight in a glider at age 14. “That was a pretty cool thing for a 14-year-old,” John said. Her flight training resumed at Gastonia Municipal Airport, where she trains with flight instructor Ross Harwell in an effort to someday earn her private pilot’s license. A private pilot’s license would allow Duncan to fly cross country and even become an instructor, though she couldn’t fly for an airline like her father. Part of earning a private pilot’s license required Duncan to take off and land several times without Harwell in the passenger seat. That day came in October, when the conditions were perfect for her first solo flight in a four-seat Cherokee 180 single-engine plane. “I was nervous but at the same time it was exciting because I was finally doing this,” she said. “After, there was this great relief and rush of accomplishment.” Her father was responsible for exposing Duncan to flight, but she said the memory of Aunt Nancy pushed Duncan to stay the course, as the overwhelming majority of pilots are men. “I’ve heard constantly that we are a lot alike and that makes me smile,” Duncan said. “I grew up hearing all these stories about how she would do this and go there. She has been a big inspiration to why I continued flying.” Though Nancy wasn’t a commercial pilot, women only account for about 5% of airline pilots worldwide, according to Women in Aviation International, Duncan hopes more women won’t hesitate to buy in to the aviation industry, whether it’s learning to fly as a hobby or a career. “Everyone’s really pushing for your success, no matter who you are,” she said. “They (instructors) just want to support everyone who’s learning to fly.”

What’s next?
Duncan continues to fly in Gastonia as part of her training and looks forward to flying solo cross country to other airports, which is the next important step in earning her private pilot’s license. “Right now, I’m limited to soloing at [ Gastonia Municipal Airport] and not going outside of that zone,” she said. “It would be nice to get the freedom to go and maybe do a couple landings in Shelby, the Rutherfordton airport or Myrtle Beach. That would be really fun.” But she doesn’t plan to become a career pilot. Instead, she hopes to study psychology and human factors – the study of how people interact with machines. High-risk industries, such as aviation and healthcare, use human factors psychology to design machines and technology for human use. Aviation and healthcare industries also use human factors to study errors and malfunctions during a flight or surgery, for example. “You hear human error as the cause of an accident, but human factors is the study of what really went wrong. Was it fatigue? Was it something on the display? Was it communication?” she said. Duncan hasn’t narrowed down her top school choice yet, but so far, she’s applied at N.C State, UNC Chapel Hill and the prestigious Morehead-Cain scholarship and East Carolina University. Duncan plans to also apply at Dartmouth College, American University, George Washington University and Wellesley College.