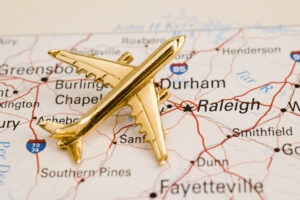 Recently, a report was released that demonstrated aviation’s economic impact in North Carolina. This report includes data covering the tax impact of North Carolina’s aviation facilities as well as the growth of the manufacturing sector. Continue reading below to learn more.

A study published by the North Carolina’s Department of Transportation’s Division of Aviation highlighted the significant economic impact of aviation and aviation-related jobs on the state’s economy.

“North Carolina: The State of Aviation” reports the state’s 72 publicly owned airports attribute $61 billion annually in economic impact. These airports support 373,000 jobs, which leads to $15 billion in personal income and has a significant impact on state taxes as well, contributing $2.5 billion in tax revenue, based on 2019 data.

Of these airports, 62 are classified as general aviation airports, which the report says, “connect local businesses and communities to global markets, house and refuel private aircraft, support military and agriculture aviation, and provide aviation services such as aerial photography and pilot training.”

The report also identifies the tax impact of the 3,300 aircraft based in North Carolina’s general aviation facilities, using an example of a $23 million airplane. The owner of that aircraft pays local property taxes equivalent to those taxes paid by 115 owners $200,00 homes, without the same need for supporting government services as the homeowners. In total, aircraft based in the state generate $11.6 million in tax revenue.

North Carolina’s aerospace manufacturing sector grew by 13% from 2015-2019, according to the report. More than 200 aerospace manufacturing companies employ almost 7,000 people in the state. Over 150 maintenance, repair and overhaul services providers create another approximately 4,600 jobs, with job growth of 54.7% in this sector over the same time period.

“This ‘State of Aviation’ report highlights the diversity of the aviation industry in North Carolina,” said Greg Voos, NBAA’s Southeast regional representative. “The significant impact of aviation on the state’s economy is demonstrated through creation of well-paying jobs, personal income and tax revenue. NBAA commends the North Carolina Department of Transportation Division of Aviation for its efforts to quantify the positive impact of aviation on the state as a whole.”

The economic impact of the COVID-19 crisis is not reflected in this report, which calls 2020 “one of the hardest years on record for airports and the wider aviation industry at large.”