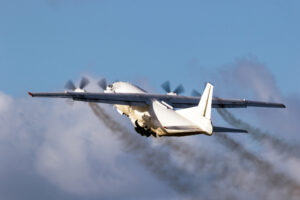 Significantly reducing lead emissions from gasoline-powered aircraft will require the leadership and strategic guidance of the Federal Aviation Administration (FAA) and a broad-based and sustained commitment by other government agencies and the nation’s pilots, airport managers, aviation fuel and service suppliers and aircraft manufacturers, says a new congressionally mandated report from the National Academies of Sciences, Engineering, and Medicine. While efforts are underway to develop an unleaded aviation fuel that can be used by the entire gasoline-powered fleet, the uncertainty of success means that other steps also should be taken to begin reducing lead emissions and exposures, the report says.

Small gasoline-powered aircraft are the single largest emitter of lead in the United States, as other major emission sources such as automobile gasoline have been addressed. A highly toxic substance that can result in an array of negative health effects in humans, lead is added to aviation gasoline to meet the performance and safety requirements of a sizable portion of the country’s gasoline-powered aircraft. When emitted from aircraft exhaust, lead can be inhaled by people living near and working at airports. Lead exposures also can occur from exhaust deposited on soil and other surfaces, spills and vapor emitted during refueling, and contact with residue left on aircraft engines and other components. Even at low exposures, as measured by blood lead levels, lead has been linked to effects such as decreased cognitive performance in children.

“Because there is no known safe level of lead in the blood, there is a compelling reason to reduce or eliminate lead emissions from small aircraft,” says a professor and head of the department of aerospace engineering at Pennsylvania State University and chair of the committee that wrote the report.

Gasoline-powered, piston-engine aircraft perform critical societal functions, including medical airlifts, aerial firefighting, business transport, crop dusting, pilot training, and search and rescue. They are also commonly used for personal and recreational flying, and are critical for meeting transportation needs in rural and remote regions. About one-third of all gasoline-powered aircraft, which include some of the most heavily used small airplanes and helicopters, require leaded gasoline to provide needed octane levels. Due to the small market for aviation gasoline and limited fueling infrastructure at most of the country’s more than 13,000 airports, leaded aviation gasoline is usually the only fuel available to operators of small aircraft.

In order to reduce the environmental health risks caused by aviation lead, the FAA should coordinate efforts to reduce emissions and exposures in multiple ways, the report says. The FAA should work with other federal agencies, such as the U.S. Environmental Protection Agency and Occupational Safety and Health Administration, and organizations within the aviation community to initiate campaigns for education, training, and awareness of lead hazards and mitigation measures targeted to pilots, airport personnel, and aircraft technicians.

A concerted effort also is needed to motivate fuel refiners to reduce the amount of lead added to high-octane aviation gasoline, the report says. The FAA should explore policy options to achieve this, while prompting airports to add the fueling infrastructure needed to dispense more unleaded gasoline. The recertification requirements for aircraft that do not require high-octane fuel also should be eased, encouraging pilots to use lower octane unleaded fuel. The report further recommends that a goal and time frame be established, potentially with congressional direction, for all future aircraft that burn gasoline to be able to use unleaded fuel.

The report emphasizes that the elimination of lead from all aviation fuel should remain a public policy priority while these efforts to sustain progress in reducing aviation lead emissions and exposures continue. The FAA should continue to collaborate with the aviation industry and fuel suppliers in the search for a high-octane unleaded fuel that can be used by all gasoline-powered aircraft, the report stresses. The FAA also should collaborate with other government agencies such as NASA to promote the development, testing, and certification of emerging lead-free propulsion systems for small aircraft applications, including battery and hybrid electric systems.

The study — undertaken by the Committee on Lead Emissions from Piston-Powered General Aviation Aircraft — was sponsored by the U.S. Department of Transportation. The National Academies are private, nonprofit institutions that provide independent, objective analysis and advice to the nation to solve complex problems and inform public policy decisions related to science, technology, and medicine. They operate under an 1863 congressional charter to the National Academy of Sciences, signed by President Lincoln.