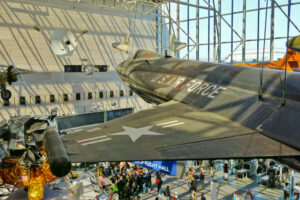 Thanks to a recent donation, the Smithsonian National Air and Space Museum will unveil an aviation gallery honoring Jay I. Kislaks’ service during World War II and highlight the effects of warfare revolutions on aviation.  Continue reading below to learn more about the opening of the aviation gallery in remembrance of Mr. Kislaks military service.

Jay Kislak was one of hundreds of thousands of young Americans who learned to fly during the dark days of World War II. After graduation from The Wharton School at the University of Pennsylvania, Kislak joined the U.S. Navy and earned his wings of gold. He served for three years on active duty, continuing his military career after the war in the Naval Reserves. He continued flying into his 90s.

“My father was very proud of his military service,” said Dr. Paula Kislak, chair of the Kislak Family Foundation, “and of those with whom he served. He attributed his subsequent success and accomplishments in life to the character-building lessons he learned as a naval aviator.”

Now, thanks to a $10 million grant from the foundation, millions of visitors to the Smithsonian’s National Air and Space Museum on the Mall in Washington, D.C., in years to come will learn about and remember that heroic, pivotal era of aviation history.

Construction on the “Jay I. Kislak World War II In The Air” gallery is expected to begin in 2022 with the opening targeted for 2025. The new display will feature a P-51D Mustang, a license-built FM-1 Grumman Wildcat and the Mustang’s nemesis—a German Messerschmitt Me-109G.

According to the museum, “’World War II In The Air’ will examine how the revolution in warfare that took place during the war redefined the promise and peril of military aviation.

Original article can be found on planeandpilotmag.com.