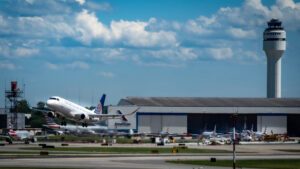 A report released by the NC Department of Transportation’s Division of Aviation highlights how the aviation sector generates billions of dollars in the economy and thousands of jobs.  Continue reading below to learn more about how the aviation economy benefits North Carolina.

North Carolina’s publicly owned airports contribute $61 billion to the state’s economy each year and support 373,000 jobs, according to a report released by the NC Department of Transportation’s Division of Aviation.  Airports and aviation-related jobs also provide $15 billion in personal income and contribute $2.5 billion in state and local tax revenues every year, based on 2019 data.

The report, North Carolina: The State of Aviation, highlights the pre-pandemic economic impacts of the state’s public airports and the related aviation and aerospace assets that support North Carolina’s aviation economy. NCDOT creates the report every two years to help guide future investment in aviation infrastructure and provide a tool for recruiting aviation and aerospace industry companies and investment.

“Despite the challenges of 2020, our network of 72 publicly owned airports, and the aviation and aerospace assets that rely on them, still help move our economy forward by creating jobs, supporting business growth and connecting people and companies to markets around the globe,” said Bobby Walston, director of NCDOT’s Division of Aviation.

The COVID-19 pandemic brought significant impacts to the airports. Commercial airline travel declined, for example, while private air charters and air freight operations reached record highs. While this report does not include the impacts of the pandemic, the 2019 impact data demonstrates aviation’s economic contribution to the state and local communities and provides a benchmark for tracking recovery.

All airports generate significant economic returns for their communities and the state. For instance, North Carolina’s public airport’s lease space to more than 3,300 private aircraft that generate more than $11.6 million in property tax revenues for their communities each year. The owner of a $23 million aircraft based at a North Carolina airport pays local property taxes equivalent to those paid by owners of 115 homes valued at $200,000 each.

The report contains data compiled and analyzed for NCDOT by North Carolina State University’s Institute for Transportation Research and Education. Impacts are calculated based on factors such as jobs supported by the airports and the businesses that rely on them, business and leisure travelers, and airport capital projects and operations.

Original article can be found on aviationpros.com.