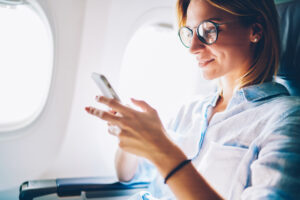 Gogo Business Aviation’s new 5G service is set to deliver speeds of 25 Mbps, with peak speeds of 75 to 80 Mbps. The upgrade for aircrafts to adopt this service will be fast and easy as assured by Gogo, continue reading below to learn more!

Gogo Business Aviation’s new 5G service is expected to deliver speeds of 25 Mbps on average, with peak speeds of 75 to 80 Mbps, the Broomfield, Colorado-based connectivity provider reported. The speed estimates are based on modeling of eight common city pairs, including New York, Miami, Los Angeles, San Francisco, and Dallas, and were confirmed by recent flight testing of Gogo’s airborne and ground-station antennas.

“A recent survey by the Boston Consulting Group reported that Gogo Avance L5 customers experienced two to seven-plus Mbps speeds, and with 5G onboard, those speeds will increase dramatically,” said Sergio Aguirre, president of Gogo Business Aviation. “We are confident that with our new higher speeds and inherent low latency, 5G will deliver the best connectivity experience in business aviation.”

Gogo is scheduled to launch the 5G service in the second half of 2022, Aguirre said, noting that deployment of the network is underway. “We’re deep into system qualification and certification,” he added. “We’re developing a comprehensive supplemental type certification [STC] portfolio, and last week we announced our launch customer, Jet Edge.”

Gogo said the upgrade for Avance L5-equipped aircraft will be “fast and easy.” Avance equipment can be offered through all nine business aviation OEMs and is STC’d across aircraft types ranging from personal jets and turboprops to ultra-long-range aircraft, the company noted, adding that it has a network of 120 authorized dealers worldwide.