Charlie Taylor: The Man Who Made The Wright Brothers Fly 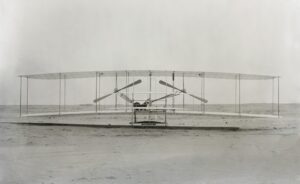 First aircraft mechanic, Charlie Taylor, played a crucial part in the success of the Wright Brothers but does not tend to get the deserved acknowledgment. Without him, it is likely the first flight would have been delayed. Continue reading to learn more about Charlie and his story.

Orville and Wilbur Wright are widely recognized as pioneers in powered flight, but without Charles E. Taylor, they might never have gotten off the ground. Even though his name has largely been forgotten, “Charlie” Taylor is the man who was able to develop an engine with a sufficient power-to-weight ratio to launch the Wrights at Kitty Hawk and into aviation history. His lightweight and powerful—for its time—1903 Wright engine removed one of the biggest obstacles to powered flight, giving the Wright brothers the edge they needed to take to the skies before their competitors.

Taylor had an innate mechanical ability and was a respected toolmaker. He was working in his own shop when one day Orville and Wilbur Wright came in and asked him to make them some parts. Pleased with Taylor’s work, the Wrights continued to bring him special projects—the beginning of a decades-long relationship that would shape the course of aviation history.