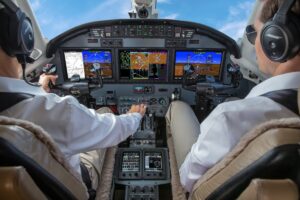 Photo Credit: As seen on globalair.com.

Well known for their flight decks, Garmin is celebrating a significant milestone. Being a leader in their field, they have carried the industry of flight decks for the past few decades and are continuing to evolve and advance. Continue reading to learn more about Garmin’s most recent achievement.

Garmin International, Inc., a unit of Garmin Ltd. (NYSE: GRMN), today celebrated the delivery of over 25,000 integrated flight decks, including forward-fit and retrofit solutions for general and business aviation, rotorcraft, military and government, and regional aircraft markets. Garmin avionics have revolutionized the aviation industry for nearly two decades, ushering in the era of fully integrated flight decks for light aircraft while also expanding the capabilities of turbine aircraft. Recognized for reliability, quality and innovation, Garmin flight decks have been certified on over 80 aircraft models representing 20 different aircraft manufacturers—more than any other avionics manufacturer.

“Pilots around the world have spent millions of hours flying behind a Garmin flight deck and it’s a true privilege to know that our avionics help them safely reach their destinations time and time again,” said Phil Straub, Garmin executive vice president and managing director, aviation. “As the leading provider of integrated cockpit systems, we are very proud to celebrate this extraordinary achievement, and we wish to extend our sincerest gratitude to our aircraft manufacturers, as well as the aircraft owners, who have selected and trusted Garmin over the years. The G1000® was a vision of our late co-founder Gary Burrell, and he would be deeply honored to be celebrating this milestone with the thousands of talented Garmin associates who made it possible.”

Garmin’s G1000 integrated flight deck was first introduced in March 2003 when Cessna Aircraft Company announced it had selected the revolutionary system for the Citation Mustang, which was in development at the time. Additional announcements by a variety of aircraft manufacturers followed, and the first customer deliveries of the G1000 began in June 2004 by both Cessna and Diamond Aircraft in their single-engine product lines. In 2010, the G3000® and G5000® were unveiled for the turbine market, offering one of the most intuitive pilot-vehicle interfaces available with the industry’s first certified touchscreen vehicle management controllers.

Today, Garmin integrated flight decks are installed on a broad range of aircraft spanning from piston-powered aircraft to turboprops, rotorcraft and turbine aircraft, including tactical fighter jets in the adversary air market. Bringing the best and brightest in integrated systems to flight, Garmin flight decks have long been the standard in the flight training industry, utilized in flight schools across the globe to allow student pilots the opportunity to train on the technology they’ll use later in their flying careers. With an estimated 600,000 new pilots joining the industry in the next 20 years, Garmin’s integrated flight decks are the systems of choice for flight training aircraft preparing the next generation of pilots for the future of aviation.