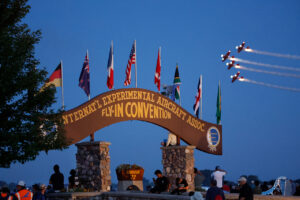 This year’s Oshkosh AirVenture 2022 event that took place recently experienced record-setting numbers. Attendees experienced good weather and an abundance of planes that flew in for attendance. Continue reading to learn more details about how successful the turnout of the event was!

With Oshkosh AirVenture 2022 in the books, EAA has come out with its show-end tallies, and to the surprise of no one who was there for more than 15 minutes (and maybe not even them), the show was a record-breaking week for the world’s biggest fly-in.

Speaking of which, there were a lot of planes, more than 10,000 of which flew into one of the Central Wisconsin airports that feed into KOSH, including but not limited to Fond du Lac, Appleton and Green Bay. It’s the same number we see every year from EAA, and truth be told, the numbers are almost always surely greater than that. But imagine for a moment, if you will, trying to keep track of the planes coming into and back out of just Wittman Field, many of which fly in and out multiple times during the same event. And the ultralights? And the helicopters? And the seaplanes? And, well, you get the idea. Ten thousand-plus it is.

The numbers of people who attend OSH is a figure that EAA has much better ability to keep track of, with everybody who gets on the grounds having to get a wrist band, so EAA’s conclusion that 2022 was a record year with 650,000 attendees is based on actual numbers. That is a lot of people, but we were there, and we believe it. There were people everywhere all week long.

In addition to all the cool planes, one factor that should be given a lot of credit was the weather, which, in the words of EAA CEO and Chairman Jack Pelton, was almost perfect. It was close enough in our books, if you skip the rain showers during Wednesday’s Night Airshow, to skip the “almost!” It was spectacular, and it was easy to see on people’s faces how much they were loving it.

Another factor is the pandemic, which is still going on, though with the vast majority of attendees vaccinated and a large percentage of those boosted at least once, according to nationwide data, it was an event that went on without much talk of Covid-19, even though just about everybody we spoke to there either has had it recently or had a family member or close friend who has. And after the show, lots of attendees are testing to ensure that they didn’t come home with an unwelcome guest. I’m negative on my two tests so far, so phew!

So back to the pandemic as a factor in Oshkosh’s success. It was a huge factor in its absence. People know that the virus still exists, but with vaccinations widely adopted and with treatments available to prevent and minimize the effects, people had a lot of confidence that things were going to be just fine. And some risks are just worth taking, says everyone who ever flew a plane and everybody who went to a spectacularly successful AirVenture.