Why Jet Owners Don’t Want to Be Tracked 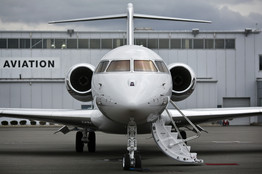 The threat information was contained in letters sent in 2011 to the Federal Aviation Administration but not made public until now. The letter-writers were stirred to action by a since-shelved FAA plan to allow the public to have greater real-time access to the flight paths of private aircraft.

Because private aircraft use the FAA’s air-traffic control system, the agency said at the time, there had to be a strong reason why these federal records shouldn’t be publicly available on commercial flight-tracking websites.

Plane owners still could block their flight plans from live tracking, the agency said, but only if they wrote the FAA a letter certifying they had a “valid security concern,” such as a “verifiable threat…of death, kidnapping or serious bodily harm.”

Major defense contractors, perhaps not surprisingly, were among those who wrote letters. Among the most alarming notes was one from Lockheed Martin Corp., LMT +0.73% which cited federal district court testimony by a confessed Islamic terrorist about a plot to assassinate its chief executive “in a retaliatory act meant to dissuade Lockheed Martin from producing drone weaponry” for the U.S. military.

Asked to comment, the company wouldn’t discuss specific threats, but said employee safety is “our No. 1 concern.”

By the initial August 2011 deadline, the FAA received nearly 500 security-concern letters. The Wall Street Journal obtained redacted copies of nearly all of those via a Freedom of Information Act request that was fulfilled after 18 months.

After a public outcry, Congress in late 2011 forced the FAA to reverse course and allow aircraft owners to block their flight information for any reason.