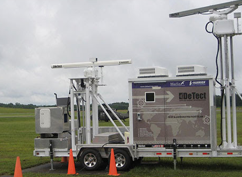 Satas combines a SharpEye radar unit, developed by DeTect of Panama City, Fla., for marine applications, with the airfield radar system from SRI of Rockledge, Fla., which makes ground security radars. Together, the systems identify and track aircraft flying in the area, all without the need for any transponders on board the aircraft. The final version of the system will also broadcast the traffic that the radars see using a computer-generated voice on the local traffic advisory frequency.

“This is real-time data,” Byers said, pointing at the Satas display screen showing red targets trailed by green tracks. The traffic display will also be available to anyone with Internet access and using the appropriate app or even an iPad. Byers began developing the system two years ago as a way to provide traffic advisory services at airports that do not qualify for an FAA control tower, or whose towers faced closure. The technology is available now, Byers said, but the Satas software still needs to be developed. Byers is now meeting with potential investors, seeking funding “in the three million dollars range” to continue Satas development. He estimates a fully functional Satas product would cost about $1.5 million.