Effects of Ice on Tailplane

An airfoil creates lift when a constant altitude and constant size wing are the only two variables involved in the creation of the lift. The effects of ice on a tailplane can be detrimental in regards to safety. Read more below about how to recover from tailplane icing. 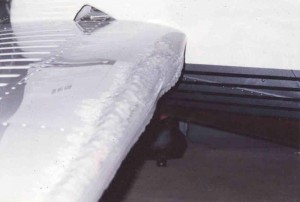 I recently received a note from Steve Koeppel, a Gold Seal Flight Instructor, asking me to review a video with which he took issue. By way of background, Gold Seals are men and women who not only flight instruct but also have the Ground Instructor Certificates that allow them to give their students academic instruction as they progress toward their various ratings. To earn such a designation, the instructor must teach a minimum of 10 students annually and of all those instructed, 80% must attain the next highest level of accreditation as a pilot. I always have been impressed with the work these folks accomplish. In my opinion, the Gold Seals constitute the FAA’s “Teachers of the Year.”

The video in question is a production of NASA

While the video dates back to the 1990s and was completed before the Lewis center was renamed in honor of Sen. John Glenn, I have found no more recent material to update the recommendations and procedures that it establishes for pilots who find themselves in conditions severe enough to ice up the horizontal tailplane of their aircraft.

Let’s review. How does an airfoil create lift? If we assume a constant altitude (air density) and a constant size of the wing (planform area), there are only two variables involved in the creation of lift. Those are the angle of attack (AOA) of the wing and the airspeed. A higher AOA means there is a higher coefficient of lift and more lift being produced at a given airspeed. Eventually, if the AOA continues to be increased, the airfoil reaches its critical AOA. Beyond that, lift is being inversely produced. That is, the higher the AOA beyond the critical angle, the less lift the airfoil is producing. Eventually, no lift is being produced by the wing.

That critical AOA is the only constant when discussing airfoil stalls. The so-called “stall speed” of an airplane is only the stall speed in level flight at a constant altitude, with no bank angle and at given weight. Change any of those variables and the airfoil will stall (reach its critical AOA) at a different indicated airspeed. For instance, at 60 deg. of bank, the wing has to produce twice as much lift as at level flight, just to keep the airplane level. This is because in a turn the lift vector is tilted and not all of the lift is working against gravity.

To the point, assume we are flying straight and level at an airspeed only 1 kt. above level flight stall speed and therefore just shy of the critical AOA. As we bank and add back pressure to create the additional lift needed for level flight, even if we add power to keep the airspeed constant, the wing exceeds the critical angle and stalls. The speed at which we were just able to maintain level flight before is not high enough in the turn.

This article is orgianlly posted to Aviationweek.com