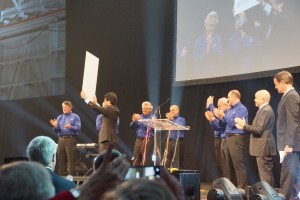 FAA certification also marks a milestone on Fujino’s personal journey, which began in 1986 when Honda sent him to the U.S. to begin an aviation research project. “Since that day I have devoted myself to design and build Honda’s original plane,” he said. “The pivotal moment was the HondaJet world debut at AirVenture Oshkosh in 2005. We displayed the HondaJet as an experimental aircraft. At that time I did not know what the future held for our project. However, when we showed the test HondaJet to aviation enthusiasts at AirVenture, the response was overwhelming. It was more than I could ever have imagined. In a sense, this was a true beginning for Honda’s aviation adventure.”

In 2006, Fujino announced plans to establish Honda Aircraft headquarters in Greensboro and bring the HondaJet to market by 2010. “We had very small team,” he said, “less than 50 people at that time. Honda took on board the challenge in designing and certifying a clean-sheet-design aircraft with new technologies, with a new engine, with a new avionics system and by a new company. It was an unprecedented challenge. To be honest, sometimes it seems nearly impossible for a new manufacturer to certify a clean-sheet design. However, today, we have nearly 1,700 associates working on the program from all over the world. Our associates helped share the same challenges and devote themselves both day and night to overcome obstacles during a difficult time, and we share our success together.”

The HondaJet is powered by two GE Honda Aero HF120 turbofans installed on wing-mounted pylons. Equipped with a Garmin G3000 flight deck, top speed of the light jet is 420 knots. There are 25 HondaJets currently on the assembly line, and delivery of the first HondaJet will take place by the end of the year. Honda Aircraft plans to produce three to four jets per month during 2016.