Bombardier started marketing for the updated cabin of the CRJ Regional Jet Series. 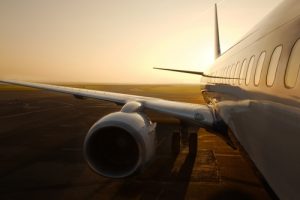 The new updates of the cabin will include new lighting, widening the passenger entry, and lavatory design.

Bombardier has begun marketing an improved cabin for the CRJ regional jet series, the company revealed on Tuesday at the Regional Airline Association convention Charlotte, North Carolina. Speaking at the convention’s first media briefing, Bombardier Commercial Aircraft vice president of marketing Patrick Baudis explained that the effort involves widening the passenger entry, new mood lighting and a new lavatory design. The exercise also slightly increased the size of the bins in the main cabin and added significantly more space in the business-class bins. In the lavatory, Bombardier managed to add 57 percent more area, including 3 inches more head clearance. In the business class cabin, it took advantage of the two-by-one seating configuration to increase the size of the right-hand bins by some 50 percent, allowing for wheels-first stowage of standard size roller bags.

The new updates will include widening the passenger entry, lighting and lavatory design.

“We are also increasing slightly the size of the bins in the main cabin, but more importantly we are reworking the opening of the bins so that we can fit more easily the big bags that passengers carry more and more,” said Baudis. The new Bombardier marketing executive also explained the process of opening the passenger entrance area with round shapes and curved lines. “You no longer have to do the zigzag pass in the galley; now it’s a wide aisle going straight into the business cabin,” he said.

Initially designed for the CRJ900, the new interior can work in any of the CRJ models, but the size of the 900 appears to lend itself to the most effective use of the various improvements. Bombardier will make the improved cabin available as a retrofit, and Baudis estimated that the company could deliver the upgrade to customers ordering it today in roughly a year. “We believe with the fleet we have out there, of course, there’s a lot of value to implement a retrofit program and I’m sure airlines will be interested,” he concluded.

This article is originally on Ainonline.com.