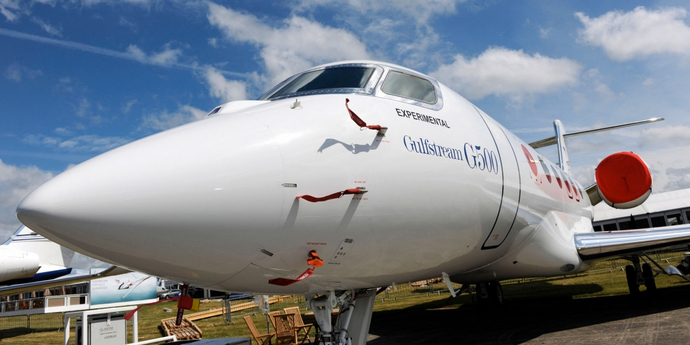 The new business jets by Gulfstream are flying their way into service in 2017 and 2018 with awaited updates and added modern features.

Gulfstream’s new G500 business jet is making its European debut here at the Farnborough International Airshow this week. The long-range aircraft arrived on Friday after a 3,732-nautical-mile non-stop flight from the U.S. company’s Savannah, Georgia, headquarters in 6 hours, 55 minutes.

Meanwhile, Gulfstream is steadily moving toward FAA certification for the G500 next year, and much of the work done on this jet will help smooth certification of the longer G600. The G500 is set to enter service in 2018, followed by the G600 in 2019. Gulfstream has brought three other aircraft to Farnborough: a G280 midsize jet, G450 large-cabin jet and G650ER ultra-long range jet.

Four G500s are now flying in the test program, and the first G600 is nearing handover to the flight test team. Although the G600’s first flight is officially scheduled for early 2017, it could fly as early as late this year.

To date, the G500 fleet has flown more than 300 flights and 1,280 hours. Some significant milestones include maximum speed reached of Mach 0.995 (maximum operating speed is Mach 0.925), flight to 53,000 feet (2,000 feet higher than the planned certified maximum altitude) and the longest flight at seven hours, 35 minutes, with zero discrepancies.

The G500 and G600 are an entirely new family of jets, although they share many systems features and the fly-by-wire flight control technology of the G650. What sets the new models apart, however, is their cabins, larger than the G450/G550 and smaller than the G650.

The G600’s interior cabin length is nearly four feet longer than the G500’s, and the two jets also differ in their range capability. The G600 can fly 6,200 nm at Mach 0.85 carrying eight passengers and four crew with NBAA IFR reserves. The G500’s range under the same conditions is 5,000 nm, although with one fewer crew member. Both offer high-speed cruise of Mach 0.90.

The flight deck is where much has changed in the G500/G600 compared to previous models. While the G650 features fly-by-wire flight controls, its cockpit is equipped with what some might consider old-style yoke controls, which take up a lot of space and block part of the instrument panel. The new jets do away with all that clutter and incorporate sidestick controls mounted on the side ledges. Combined with the touchscreen-control displays—there are 10 total, plus one for security controls—the result is a clean-looking flight deck.