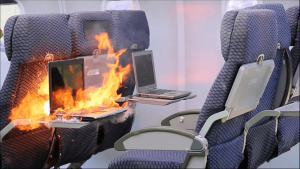 “It’s not geographically specific.” Cox gave a presentation at NBAA-BACE about fires caused by lithium ion battery-powered devices like cellphones, tablets and laptops. “The number of fires is actually going up substantially–as you’d expect,” he said. “We’re flying more; we’re seeing more lithium devices on the airplanes. So it’s as expected, but it means that this is in fact a rising risk within aviation.”

When battery cells in these devices go into thermal runaway, the gel that comes out is about 1,000 F (537 C) and the gel is sticky, Cox explained. “So if it gets on skin, it’s a third-degree burn on contact. The incapacitation of flight crew members is yet another aspect of a lithium battery fire that we have to address, and address it fully.” He noted that in business aircraft, the firefighter in an in-flight emergency may be a pilot.

“It’s bad enough to have a flight attendant that is injured, but to lose a pilot creates a risk on its own,” said Cox. “So we’ve got to have a full approach to dealing with this.” Smoke in an airplane is “exceedingly serious,” he continued, adding that smoke hoods need to be considered. He showed a video in which a device goes into thermal runaway and fills an area with smoke, totally obscuring the camera’s view in a matter of seconds.

Another video showed a laptop that burst into flames more than once despite attempts to extinguish the blaze. “What are you going to do with this much smoke in your airplane?” asked Cox. “How are you going to fly the airplane?” Thermal containment technology is available and should be considered, he added. “Knowing that we’re not going to get lithium batteries off the airplane, we need to look at containment and the capturing of the device, so that we have it on board in a condition that no longer poses a threat.”

This article was originally posted on Skiesmag.com.