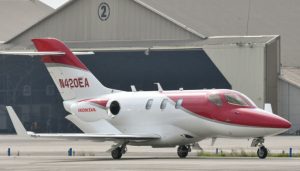 HondaJet made its first official appearance in Taipei at Taipei Songshan Airport on April 21!

“As part of our global sales strategy, Honda Aircraft Company continues to evaluate new markets for the HondaJet. Today, we are excited to be in Taipei to showcase the HondaJet and demonstrate its capabilities for the first time,” said Fujino. “We are confident HondaJet, with its high performance, superior fuel efficiency, and a range that covers the region, would be a valuable tool to support businesses and companies in Taiwan.”

Taiwan has strong potential in the light jet market and Honda Aircraft Company has received strong interest from potential customers. The company plans to utilize today’s special event to enhance its market evaluation for possible future introduction of the HondaJet in the region.

The HondaJet was developed from a clean sheet design and is the world’s most advanced light jet. It is certified by the United States Federal Aviation Administration, European Aviation Safety Agency, and the Civil Aviation Safety Authority of Mexico. The HondaJet incorporates advanced technologies that allow it to achieve both high speed performance and high fuel efficiency.

This article was originally posted on SkiesMag.com.