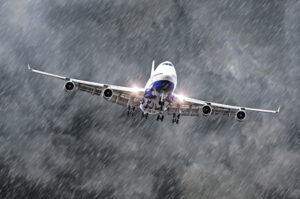 nflight emergencies must be prepared for well in advance. It’s important that a pilot practice proper procedures and stay up to date on their training in order to adequately handle the situation. Inflight emergencies can be mitigated and aided by taking lessons and practicing simulated flights. Continue reading below to find out more!

Commercial and military pilots practice inflight emergencies on a regular and frequent basis. The value of this training is threefold. First, it reinforces the procedures to be followed to ensure the pilot’s focus is in the right place. Second, it expands the pilot’s systems knowledge, which helps provide confidence during emergencies that do not neatly fit into the situations published in the emergency procedures. And finally, sitting in a Flight Training Device or cockpit, touching the actual switches, and seeing the indications provides real comfort as the pilot retraces previously learned emergency procedure steps with the aid of muscle memory. Most pilots have heard of the “blindfold cockpit check,” and this kind of emergency procedure training is a logical next step. So, let’s consider ways to increase our knowledge, confidence, and comfort when the red lights are on, and the engine is stumbling.

A few years back, every military pilot practiced emergency procedures in a Cockpit Procedures Trainer (CPT). These CPTs were realistic representations of the aircraft cockpit that represented aircraft systems with a high level of accuracy. Often, the two victims, aka pilots, would enter and strap in their simulated jet while their inquisitor, aka instructor, would program three hours of non-stop mayhem, engine fires, and destruction. These simulators are best described by the title to a 1926 novel, “ODTAA,” or “One Da** Thing After Another!”

Each time the crew would successfully emerge from one harrowing predicament, another even more sinister emergency would occur. The final crescendo usually involved an ejection from the crippled craft followed by an immediate trip to the Officer’s Club to debrief. However, these CPTs were quite effective. The best part was the pre-event study and preparation, reinforced by the hands-on practice. It kept everyone in the books and created lasting memories and habit patterns. When the inflight emergency finally occurred, the pilots reacted with knowledge, instinct, and a bit of muscle memory.

The airlines took the next step forward with Line Oriented Flight Training (LOFT). The simulated trial by fire was replaced with a more focused scenario, closer to what might actually be encountered in real-time flight operations. The CPT was replaced with a very realistic Level D simulator. Scenarios might include such things as systems failure, unruly or sick passengers, unforecast weather and so much more. This time, the pilot’s actions were deliberate and guided by the Quick Reaction Handbook (QRH). The decisions were well thought out, and the event concluded with a safe landing, with nary a drink spilled in first class. The preparation by each crew member reinforced systems knowledge, and the simulator training improved procedure application, crew coordination, and muscle memory.

Meanwhile, back here on planet Earth in the general aviation world, most pilots have little to no access to a CPT, Level D Sim or even an FTD that closely resembles their aircraft. However, if you do have access to modern GA flight training devices (FTD), by all means, use them. Consider practicing the wide variety of systems failures and emergencies that are possible. Develop scenarios that mimic real-life and respond accordingly. The FAA Industry Training Standards (FITS) webpage on the FAA site has several realistic scenarios created by pilots and educators for just this purpose. However, in the absence of a flight training device, there are a couple of other options.

OPTION ONE
Consider a lesson with your local CFI to focus on scenarios, preferably with a good flight training device. Make it part of the ground time for the flight review. But this time, rather than sitting at a table, use a simulator. If that’s not an option, sit in the cockpit of your own aircraft with the power off and work on each of the possible emergencies. While parked with the engine off, review engine and system failures you might encounter on the runway, right after takeoff, at level off, cruise, descent, and so on. Don’t just talk about them. Recite the memory items, touch (don’t move) the switches and handles, refer to the checklist and POH and talk the situation to a safe landing—sort of the “Blindfold Cockpit Check” on steroids. This builds up familiarity with your machine, confidence in your knowledge, and muscle memory that might come in mighty handy one day.

OPTION TWO
Create your own LOFT scenario during your next cross country. Consider the following situation. The flight to North Carolina to see the kids takes about three hours. The first hour is busy with takeoff, departure, and busy Jacksonville airspace (cumulous buildups, airliners, and a few of those pesky Navy jets). The last hour of the trip is filled with preparations for the arrival and approach. Also, the last hour is the first time some of us more mature pilots dare open a cold drink or have a cup of coffee! However, the middle hour is usually sightseeing, navigation, and traffic avoidance fest over the beautiful South Carolina low country.

In preparation for this golden “middle” hour, jot down a realistic emergency scenario before the flight. What would you do if you suddenly had zero oil pressure, a failed alternator, a vacuum pump that no longer creates suction? Even though it is a beautiful VFR day, assume you are over an undercast with a 1,000-foot ceiling. What immediate actions would you take? What is still working? What is working now but won’t be much longer? How much fuel remains, and how soon do you need to divert or land? Where would you land?

Then, use your onboard resources, including the front-seat passenger, if they are amenable, to talk through the actions required to land the aircraft safely. Thinking about these possibilities while sitting in the aircraft at altitude makes the thought processes more vivid and the lessons more real. Important safety tip! No need to involve ATC in your scenario or divert planning and keep your head out of the cockpit! However, think critically about how you might use ATC’s services if your LOFT were for real.

By using any of these methods while seated in their own aircraft, a pilot may rehearse inflight emergencies before they actually happen. Our commercial and military colleagues regularly practice a wide variety of emergency and abnormal procedures. There is no reason that we can’t as well. It just takes a little imagination. Remember, Preflight Practice Prevents Poor Performance. Fly the aircraft!